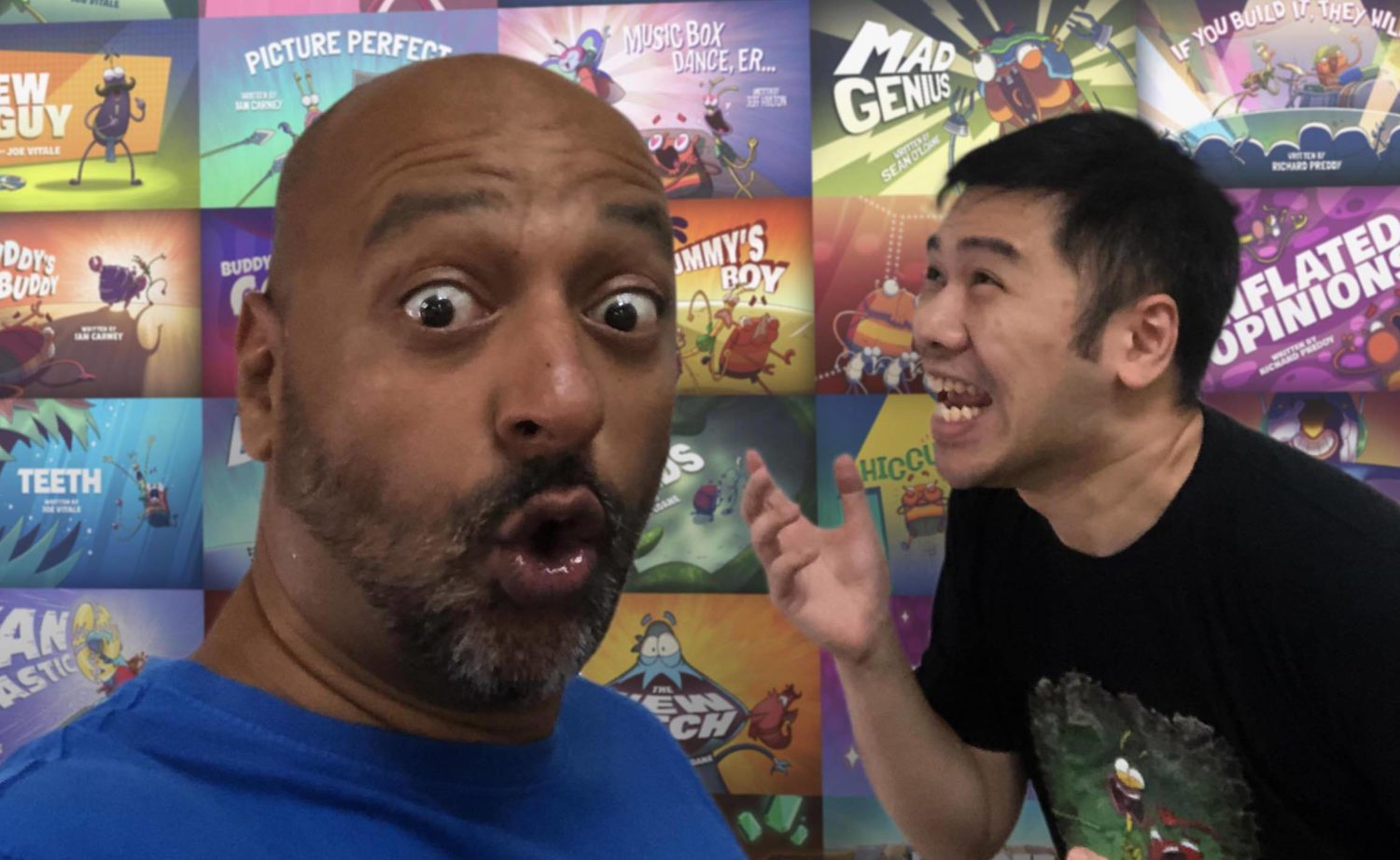 Jetpack goes Behind the Blast with Walid Omar, executive producer and director of Buck and Buddy

Where were you when you first had the idea for Buck & Buddy? How did it come about?

We’d just returned from a market, where it was clear how big slapstick non-dialogue comedy was becoming (Oggy, Larva etc). It was everywhere in Asia and my kids were loving it; they were quite obsessed and transfixed!

I was sitting in the café below our studio with my partner (Brian Chong, director of Buck & Buddy) and had the idea to take child behaviour and blow it up to make a more character driven non-dialogue series.

We evolved the idea to make it centre on post-apocalyptic insect survivors (of course!). Naturally poop needed to be involved and the stick insect/beetle dynamic gave us a classic little and large comedy duo set up.

Naturally Buck and Buddy are based on my two sons and watching them grow up has been a huge inspiration – their challenges, behaviour, actions, attitude, interests etc…

Having two boys who are silly and love to laugh helps enormously! We actually filmed them for a live-action scene in the “Trouble Feature” episode.

What inspired the idea of a stick insect and beetle?

We wanted to feature insects from Malaysia (the production is based in Kuala Lumpur).

But, also ones that were kind of gross and able to reflect the physical attributes of a Laurel and Hardy type comedy duo, which naturally led us to a stick insect and beetle.

What is your favourite insect?

In the show it’s Pharaoh for sure. He has me in stitches and he reflects anyone who has leadership aspirations.

In general, I love stick insects. Me and my boys love visiting and viewing the insect collections at the KL botanical museums and parks. My favourite is a praying mantis. I’m looking forward to introducing the mantis in the new season.

The characters communicate entirely through an impressive arrangement of sounds and intonation – how did you cast for this?

We had great fun coming up with the non-dialogue.

A special mention goes to Brian Chong. He directs the show and also did the voices during development. We laughed so much during the sessions we ended up keeping him for almost all of the supporting characters.

We knew who we wanted for Buck and Buddy. Gavin Yap and Steven Tan are fantastic comedians/writers/actors in their own right. Letting them loose in the studio was a constant source of laughter and inspiration, and they offered much needed comic relief during the testing times of producing a series. We still use some of the characters’ key grunts in every day work situations.

We’ve noticed quite a few references to film/popular culture – which are your favourite ones and why?

Naturally, we picked shows from our 80-90s growing up period that made impressions on us. My favourite is "Clowning Around" which is a parody of the film It.

Three Bugs and a Lavae (based on Three Men and a Baby) reminds me of the early days of parenthood.

Which character do you identify with most and why?

Pharaoh (as mentioned) because he reflects the challenges and pitfalls of leadership. I can fully identify with that leading the studio!

Roger is also a favourite. There’s a therapeutic satisfaction in seeing what he has to go through in any given episode.

It’s very funny! Who are your big comedy influences?

Growing up in the UK, Monty python was a big part of our lives.We loved Cartoon Network and Nickelodeon shows during the early '90s, when cartoons could be cartoons.

What’s the funniest thing that’s ever happened in the making of the show?

Watching Brian (who’s a bit bonkers) wildly gesticulate the animation execution to our animators for every episode.

Imagine the silhouette and sounds of a deranged man coming from the meeting room, physically acting out the way he wanted the characters animated. His acting inspired our teams to go off the model and allowed them to express themselves to the max.

The recording sessions deserve a special mention too. Our studio was like an episode of Buck and Buddy for 15 months; so much fun and craziness!

What has kept you creatively inspired through lockdown?

Lockdown allowed me to spend a lot more time with my family and explore some family activities that running a studio had denied me.

We have been homeschooling our kids since preschool. Credit to my wife, Lorna, who is not only our creative producer, but is also well versed in creatively inspiring and educating our kids.

Like most families, we relied on the fantastic resource of YouTube/Pinterest/Facebook to keep our spirits up and the random mix of content (music, art and dance) inspired us creatively.

I’m a huge Will Ferrell fan and a special mention goes to the movie ‘Eurovision’ which we watched (and loved) as a family.

"Go" by the Black Keys. It reminds me of Summer holidays. We just got back from a week on the Island of Perhentian; just what was needed after three months in lockdown.