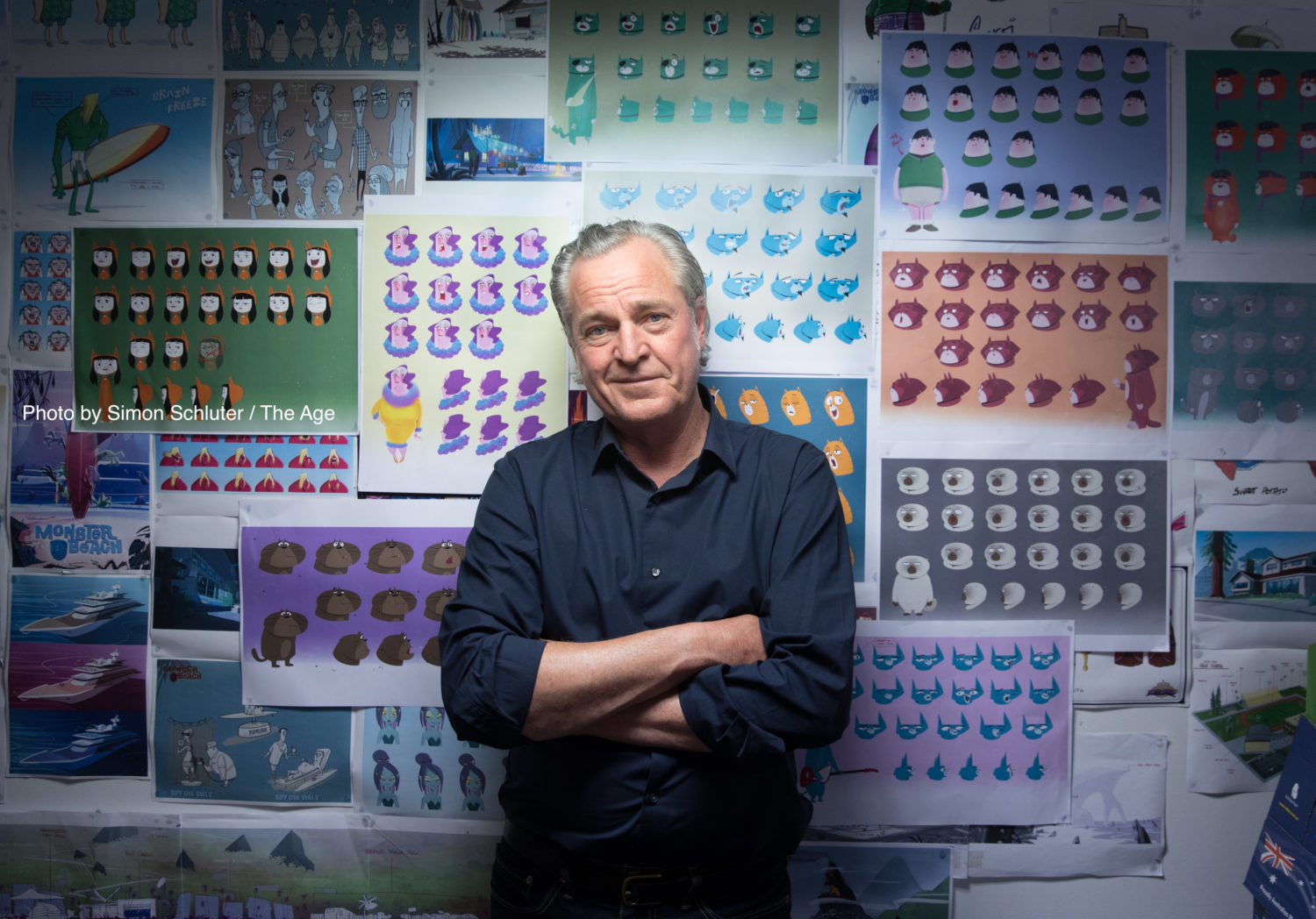 Jetpack Goes Behind the Blast with BES Entertainment’s Bruce Kane.

Where were you (and what were you doing) when you first had the idea for Kitty is Not a Cat?

It was 4am in the kitchen. Weirdly the idea of a little girl following a cat home instead of the other way around made sense at that hour.

Maurice (Argiro), my long-term collaborator and the show’s co-creator had designed some cats in a psychedelic sequence for a music video for a band called Record Producer. While these designs didn’t look anything those that ended up being in the show it kind of got us thinking about a music driven series featuring a bunch of ‘care free’ cat musicians. We just weren’t quite sure where to take it until the 4am moment when the idea of the cats having to take on the responsibility of looking after a human until they could find ‘her owner’ came about. Problem being the little girl is determined to be a cat and the cats are forced to try and teach her to behave like a human so they can set her free back into the wilds of human society. It’s kind of ‘Born Free’ but with Elsa ( the lioness ) in charge of repatriating George and Joy Adams.

When I shared the idea with Maurice he told me he’d recently been out to dinner with friends and their 5 year old daughter had curled up under the table and purred. The couple explained their daughter had decided she was going to be a cat and had been acting this way for some time and was very determined that this was to be her lot in life. So it had some basis in fact after all.

What triggered the idea?

Really love the way young kids see the world and their way forward as limitless. They are connected to everything around them and don’t judge based on what the adult world expects or regards as logical. So if you ask a young kid what they might like to be when they grow up you are just as likely to get an animal as you are a profession. We kind of find that cute but then again what adult hasn’t looked at another creature and wondered whether they might have it more sorted than them.

A lot of the adult world is confusing and full of contradictions for little kids so we set out to try and explore this from the perspective of the cats, who do not understand the human world at all but are forced to break it down and unravel the logic to educate Kitty. The idea of the cats looking at what we do from a totally innocent perspective gives us the opportunity to reflect what it is that young kids are trying to come to grips with. Likewise for adults it’s hopefully fun to look at what we take for granted and understand that it can be interpreted completely differently through fresh eyes.

Are you a cat lover? (or more of a dog person?)

Yes and yes, I have both. The cat sits at the top of the pecking order. Actually, frighteningly near the top of the household. The dog and myself somewhere near the bottom … we are still figuring out who occupies the bottom rung as this can change according to what either of us may have done on a given day.

What is your favourite animal? Any plans for a show featuring them?

I’d have to go with the wombat. They are cute, funny and stubborn. Interestingly they can run as fast as the fastest human on earth (27.8 miles per hour), but only for 30 metres. Then they abruptly wind down to a dawdle. They are not big on changing direction and will just barge on through pretty much anything in their way. Wombats are quite shy and cautious around humans but once they get to know you and if they approve, they will hang out.

Would love to do a show featuring them in all their glory and we have been kicking around some ideas and designs, they are also fantastically easy to draw, will keep you posted on how we get on.

Which character in the show do you most identify with and why?

Well I love them all but King Tubby is a lot fun to work with. He revels in his title but unbeknown to him the cats have deliberately chosen the stupidest cat to be their leader as he’s the easiest to manipulate.Which is kind of a familiar thing to anyone keeping an eye on current politics.He’s a really fun character to write, as he represents all of life’s foibles but unlike some current politicians, has a good heart. He always ends up in the right spot even though he gets there by going the wrong way.

If you made the show again, would you change anything? If so what and why?

No, I wouldn’t. But the animators would probably request less characters. There are 19 before guest roles!

What’s the funniest thing that’s happened in the making of the show?

It’s been a load of fun to make and plenty of funny things along the way but the auditions for the role of Kitty were pretty funny and bizarre for all involved. I’ve never had to audition or for that matter attempt to voice direct actors to meow before. It was further complicated by the fact we had some of the best actors in the country turn up, some of whom hadn’t been briefed by their agents that they were to meow.After coming to terms with the fact that this is all the lead character says they got into. Suffice to say we all discovered there is a lot more to meowing than we give cats credit for.

Rosalind Oades (who plays Kitty) won the role as when she wasn’t laughing, Rosalind found shecould achieve a really wide range of tone and expression. Even she was surprised by the incredible range of her meows. She never knew. Most of us wouldn’t. Not to mention Rosalind’s ‘hissing’, ‘purring’ and ‘growls’ which were likewise top shelf .

The show is very funny – who are your comedy inspirations? Got any good jokes?

There’s a lot and I find them funny for different reasons. I really like the comedy in Wes Anderson’s films and TV shows like Detectorists, Man Down, Toast of London, IT Crowd, Parks and Rec, Nighty Night, Veep, Strangers With Candy, Please Like Me, Fleabag, Derry Girls to name a few off the top of my head. They all play with format and make me laugh when I’m not expecting to.

In terms of Kitty Is Not A Cat we were also inspired by shows that took an offbeat premise and applied that to everyday life. A lot of these seemed to get made in 1960’s for some reason and the quality varied a lot but if you dig through them there were some stand out episodes. The innocence and absurdity of shows like The Addams Family, Get Smart, Green Acres, The Munsters etc which I grew up watching on re runs in Australia were gentle but celebrated being different in a normal world.

Music is a huge part of the show, what have your favourite lockdown tracks been?

The vinyl has been getting a bit of workout in the back study and it’s been pretty eclectic as a result. So going with the last three albums played my picks are ….

What music inspires you creatively and why?

The show is full of musical references spanning a broad spectrum of genres and part of what we have set out to do is introduce musical styles to kids that they might not have heard before so we range from classical to jazz, garage rock to dub and electronica, pop through to metal, reggae to country and a bunch of showtunes in there as well.

For those who want to look for it there are a bunch of musical references stitched into the show for example ‘The Nazz’ (one of the lead cats) is a reference to David Bowie’s Ziggy Stardust tip of the hat to Lord Buckley and King Tubby’s name references legendary Jamaican engineer Osbourne Ruddock, acclaimed inventor of dub. If you look in the background you’ll see paintings on the wall featuring The Velvet Underground, Lemmy from Motorhead, Bernard Edwards from Chic plus George Clinton from Parliament and a heap more if you’re prepared to hit the pause button.

What’s got you through lockdown? (Can be film/books/podcasts/music/food etc)

Spending time with the family has been wonderful especially as our kids are not kids anymore. There’s been a lot of cooking and for some weird reason endless hours of watching The O.C. …. Kids choice not mine but fun. Both our dog ‘Peppa’ and cat ‘Grey Cat’ have likewise enjoyed although I suspect it’s been more for the couch company.